Wollongong in Posters: Art on a Telegraph Pole

A Change in the Weather 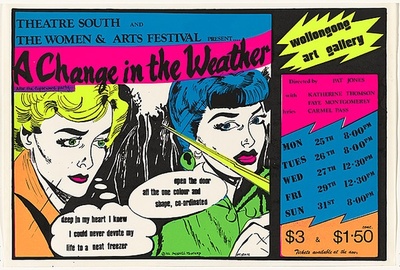 Screenprint, printed in colour from four stencils, 48 x 76 cm, Seagull Posters and the Lucifoil Poster Collective. Poster for the Theatre South and The Women & Arts Festival production of A Change in the Weather at the Wollongong City Gallery. University of Wollongong Archives Theatre South Collection D235.

Background: This poster by Janni Stumbles promotes a work by well known playwright and founding member of Theatre South, Katherine Thomson. In A Change in the Weather, a play about two women at work in Wollongong, she explores one of her recurrent themes of how ordinary people respond to social, economic and political change. Katherine and Faye Montgomery performed in this well received play.

Commentary: Yanni Stumbles / Janni Alexander (1952- ) studied art at East Sydney Technical College and produced artwork and screenprints with the Lucifoil Poster Collective and Tin Sheds Art Workshop at the University of Sydney between 1980-84.Some of her prints from that period bear the inscription ‘Seagull Posters’, including 1982’s colourful ‘A Change in the Weather’ produced for Theatre South, Wollongong and the Women & Arts Festival.Yanni moved from screen printing to working in the Australian music industry in areas of management and production design.One of her most notable works in the cover for the 1984 Hoodoo Gurus breakthrough album Stoneage Romeos. For a short period thereafter she managed Paul Kelly and the Coloured Girls, producing LP cover art and promotional posters. Yanni subsequently worked as an accountant with the Victorian Rock Foundation in 1995 and in more recent times as a production accountant in the Australian television and film industry.Her poster art from the early eighties exhibits both feminist and modernist influence, with A Change in the Weather reminiscent of the style of American artist Roy Lichtenstein, with its comic-style imagery, fluorescent colours and dynamic text bubbles.