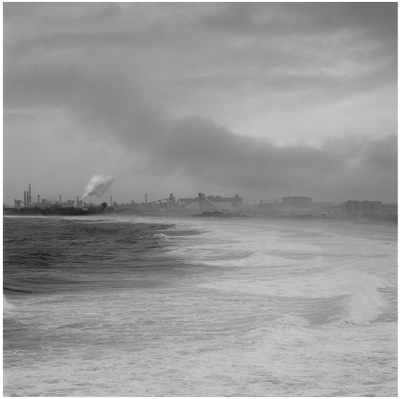 Derek Kreckler
Currently I am investigating 19th and 20th century photographic and print styles using contemporary technology and processes, and in this first series I have been looking at the Illawarra coal coast as a subject. The images on exhibition are prototypes, designed to be printed as editions using the photogravure process.

The idea behind the series has evolved from observing the work of the English pictorial photographer Francis J Mortimer (1874-1944), during a recent exhibition at the Art Gallery of NSW (2008). Mortimer believed that photography is an art form, no different from other forms of two-dimensional art, saying that “the process is a medium of expression and the camera, lens, and sensitive paper merely the tools employed”[1].

He was adventurous in his methods, risking his life to achieve certain images. In one picture Big wave hunting c 1903 (not shown) Mortimer is seen in “action, secured by rope tied around his waist…”[2]. “Never turn your back on the sea for an instant,’ he said, ‘the last time I did that, it put me in bed for two days with bruises and a smashed camera”[3].

My work in this exhibition does not mimic Mortimer’s performative method. However they are pictorial, which for me is the first step towards capturing the ocean as a subject, its force and chaotic repetition.