A Tale of the Stinging Nettle 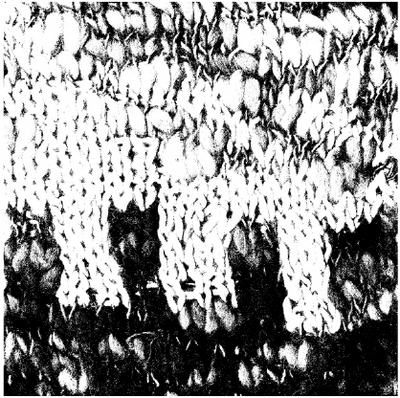 Coming out of my research on the hierarchically perceived relationship between oral and written dissemination of knowledge in Western society and how this determines the reception of Aboriginal art, I explore aspects of the fairy tale and knitting as social experience, where the rigidities of oral and literary knowing dissolve.

The fairy tale is a mapping device of the unconscious; of origin and place. Fairy tales travel across time and space and adopt various forms across cultures, embodying displacement and placement at the same time. Before folklorists such as Jacob and Wilhelm Grimm wrote them down – fairy tales were passed on orally.

Through the merging of the tactile (knitting), optical (photography), and cognitive (book) the memorising and discursive properties of these transformative media and their interrelationship come to the fore. Stinging Nettle is central in Anderson’s fairy tale and I use its materiality as meaning-making medium through the organic dye for wool and bamboo yarn. Printing is instrumental to discourse – however other such instrumental processes often precede the printing process.

Internal narratives of the photograph and the external of the written text are juxtaposed with the hand-made garment. I employ knitting as social process - during which stories are told and retold - and as ReSearch of memory. Making of the garment becomes a thought process in itself and a frame for the social act of passing on knowledge wrapped in stories.