Australian Left Review was a monthly journal published from 1966 to 1993 by the Communist Party of Australia. It covered areas of left wing politics, industrial relations, human rights and the environment. The precursor was the Communist Review 1934-1966. During 1992-3 it was published as ALR Magazine. UOW Library wish to thank the University of New South Wales Library for supplying several source materials for this digitisation project.

Backflip to the Future
Ian Cook

Managing to Get By
Clare Curran

Towards the Abyss
Tony Phillips

The Comfort of Alex
David Nichols

The Keys to Keynes
Peter Groenewegen

...and be Damned!
Alex Millmow

The Lure of Melodrama
Susan Dermody 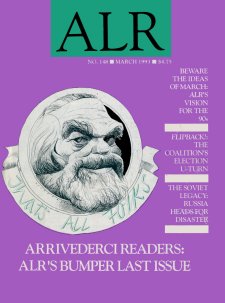